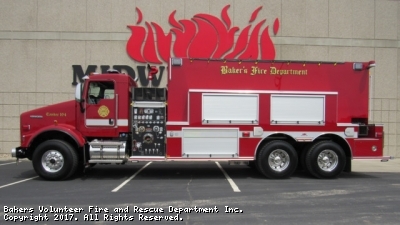 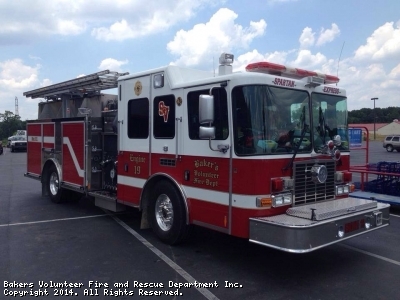 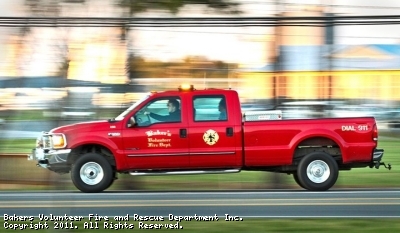 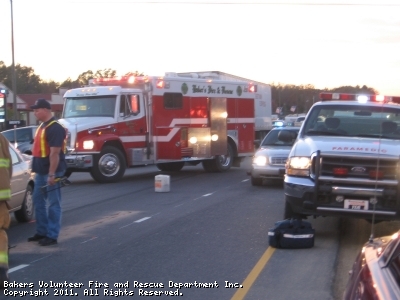 1994 Freightline FL 70
Rescue 19 is a 1994 Freightline FL70 with a 18 foot box. This unit carries Hydraulic Extrication tools "Jaws of Life", Rope rescue, confined space rescue equipment, and water rescue equipment. This truck is also equipped with basic medical supplies and an Automated External Defibrillator. Rescue 19 responds to all rescue calls and motor vehicle accidents within our response area and at the request of neighboring departments.
Brush 197 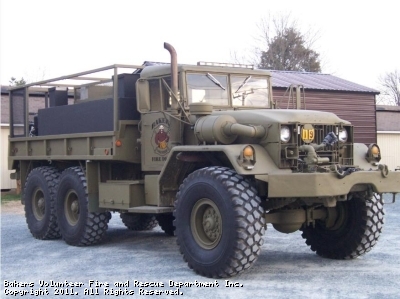 1975 AMG 5 ton
194 holds 1250 gallons of water and is equipped with a bumper mounted monitor and two side nozzles, all controlled from inside the cab. 194 also carries numerous hand tools.
Brush 196 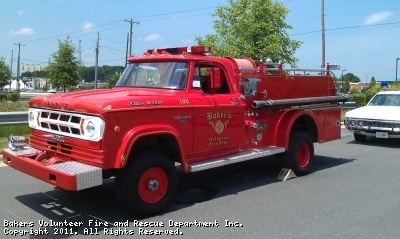 On June 10, 1967 John V. Chaney, President, signed the purchase order for what would become ?196?. The truck was purchased from Helms Brothers Motor Company at 804 Charlotte Avenue in Monroe, N.C. The total purchase price was $3,797.54. We paid an extra $45.00 for the Anti-spin differential but saved $6.40 by leaving off the arm rest. After completion by Dodge, the truck was sent to Anderson, Indiana to the Howe Fire Apparatus Company to await final specifications. On November 1, 1967 the contract was signed with Howe and construction began to transform the Power Wagon into a fire truck. For Howe?s part of the project, they would receive $7,786.00 if the truck was delivered within 100 to 110 days. The truck finally arrived for service at a grand total of $11,583.54. Unit 196 has seen nearly forty years of service with Bakers. She was first out Engine in the early days and could be seen responding down the road with firemen standing on the tailboard awaiting arrival. Over the years she made many transitions to fit the needs of the community. 196 was the first apparatus able to effectively foam the runway at our local airport. She ran house fires and car wrecks and everything in between. Eventually she had to step aside as the modern pumpers were able to do the job better and carry firemen in a safer manner. With most tasks covered by other apparatus, 196 would become strictly a brush unit. The task was dirty and muddy but she answered the call and performed well. She outweighed most brush units by a few thousand pounds and was not a stranger to being stuck in the mud when operated by those who didn?t care for her. For those operators that knew her limitations, she was a serious contender to be the best brush unit ever. She has winched out nearly every brush truck in our area and several engines and tankers. Once at a large woods fire near what is now Suburban Estates, the local forest ranger kept sending 196 orders for the fire attack. While moving through the area we noticed several other units motionless with flats or broken down or just plain old stuck. As 196 jumped out of the woods we saw our Ranger David Steel in the roadway. David looked at the truck and said ?man that thing is a sled; I can?t believe you guys ain?t stuck?. After that fire 196 became known as ?The Sled?. A name she now wears proudly above her rear doors. After the purchase of a new brush unit in 2004, 196 will finally get some much deserved rest. She is currently undergoing modifications to the engine, interior and exterior. Her pump, tank and plumbing were refurbished 6 years ago and are in excellent condition. We want to preserve this unit as a piece of our valuable history. Our intent is to use 196 for a public relations and public education tool. Although she wears a new coat of paint and many modern upgrades, she is still listed fully operable and able to respond to calls when needed.
Facebook Timeline
Upcoming Events
Every 3rd Monday
7:00pm
Business Meeting
Picture Gallery

Copyright © 2006-2020. YourFirstDue Inc. All Rights Reserved. Designated trademarks and brands are the property of their respective owners. Content on this web site is supplied by Bakers Volunteer Fire and Rescue Department Inc.. YourFirstDue Inc. cannot be held responsible or liable for any content, text, pictures, or any other media found on this web site. Maintained by the members and staff of Bakers Volunteer Fire and Rescue Department Inc..
Management Login
Powered by