Bakers Volunteer Fire and Rescue Department Inc.
About Us

THE BEGINNING OF BAKERS VOLUNTEER FIRE DEPARTMENT
From a detailed history by K.C. Long

Up until the mid 1950’s the only fire protection that the Bakers community had was a pine top and a bucket brigade. What sparked the idea that we should have some kind of fire protection was the burning of the Tommy Neal and Ruth Secrest home in late November of 1955. It was a total loss with only three items being saved from the fire. The first fire department discussion was in a Brotherhood meeting of Shiloh Baptist Church in December of 1955. Rev. C. W. Teague pastor of Shiloh Baptist Church was the guiding inspiration and influence that brought about this movement.
The decision to start a fire department would take the help from many of the communities’ fine citizens. The first Board of Directors appointed were Robert O. Helms, John W. McCorkle, Walter C. Sprouse, K. C. Long, Leo Tyson, Kemp Price, Shufford Carnes, Frank H. Hawfield and Rev. C. W. Teague. The first Chief to serve over the volunteers would be John Moore.
With personnel in place, the next item to address would be the purchase of a fire truck. A 1956 ford cab and chassis was purchased from Bowie Motor Company of Monroe for a total of $9265.00, at the time Bakers only had $13.00 in the bank. The truck was placed at John Moore Auto Body Shop since there was no fire station at the time. Bakers answered its first call from that location with a response to Highway 601 south. The first fire was at Earl Williams’ poultry farm. Bakers responded and stopped the spread of fire in the second bay of the house. Mr. Williams enclosed the front of the building and placed the chicks inside the very next day.
The first chicken bar-b-cue was held in April of 1956. A total of 400 chickens were purchased from Carriker Poultry Company. Another bar-b-cue was held in October of 1956 and 850 chickens were purchased. This was the beginning of a successful fundraiser for many years to come.
Mr. And Mrs. J.C. Conder offered a lot on which to build a station and the foundation was dug. During this time Mr. And Mrs. Carl Helms offered a lot at Bakers. With this being a better location, the offer was accepted in January of 1958 and the first station was erected at Bakers.
The January 1958 annual meeting members voted to purchase an Auto Car 2500-gallon tanker truck from the Civil Defense for $140. This tanker along with a converted Dodge M37 4x4 weapons carrier gave the department three apparatus. At this meeting Chief John T. Moore was appointed as chief for another year. Stafford Presson, Gray Ennis and Walter Sprouse were appointed as assistant chiefs. The purchase of 75 firemen auto tags was also approved.

In 1961 under the leadership of V.T. Helms Jr., the Fire Department was approved by the North Carolina Fire Insurance Rating Bureau as an approved fire protection district and carried a lower insurance rating.

In 1974 a new fire station building was started on land received from Martin/Marietta. The land was valued at $65,000.00.
In July 1977 a Ladies Auxiliary was organized with 18 members.
At the November 17, 1980 meeting, Mrs. Peggy Elms was the first lady to be elected as a member of the board of directors.
Bakers VFD have always been in the fore front of Union County Fire Service.

When the brush truck (196) was purchased in 1968 it was equipped to roll and pump water at the same time. This allowed for faster fire extinguishment across large areas without long hose lines on the ground. After delivery, the builder was having such a demand for this option; they put the design on the assembly production line.

When Squad 19 (1994 model) was purchased, it was so far advanced that the builder took it to St. Louis, Missouri to the International Fire Equipment Expo. The builder paid all expenses for Chief Luther Judy and Assistant Chief Ken Long to go out and help demonstrate the truck. Fire Officers from all over were telling others to go look at Bakers Squad Truck. Many of them were trying to determine how they could purchase one just like it.
Bakers VFD has continued to evolve with the fire service. The purchase of new and innovative fire and rescue equipment, as well as high training standards, will keep Bakers in the forefront of modern fire service for years to come. 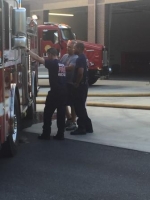 Copyright © 2006-2021. YourFirstDue Inc. All Rights Reserved. Designated trademarks and brands are the property of their respective owners. Content on this web site is supplied by Bakers Volunteer Fire and Rescue Department Inc.. YourFirstDue Inc. cannot be held responsible or liable for any content, text, pictures, or any other media found on this web site. Maintained by the members and staff of Bakers Volunteer Fire and Rescue Department Inc..
Management Login
Powered by